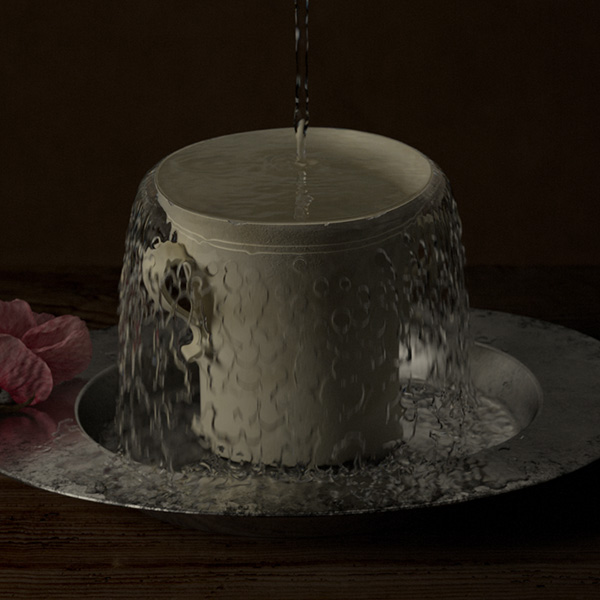 We have worked closely with the visual artist Shirazeh Houshiary to produce the animated film A Cup and a Rose. Houshiary's film A Cup and a Rose is inspired by the 17th century Spanish painter Francisco de Zurbarán's still-life painting A Cup of Water and a Rose (1630), set to a musical score by Estonian composer Arvo Pärt titled Cantus in Memoriam.

For A Cup and a Rose, Houshiary came to us with an image of Zurbarán's painting, and a concept to add narrative to through animation. Working closely with Houshiary, Hotbox Studios' Mark Hatchard recreated the original elements of the painting as 3D models, added texture and light to mimic the look of Zurbarán's painting, then used a combination of keyframe animation, procedural animation, dynamic animation, and fluid dynamics to create the animated film.

The production of Houshiary's film A Cup and a Rose has been the most challenging animation project we have ever worked on. As we began the 3D modelling, we realised the proportions of the painting were not true to life, meaning elements needed to be manipulated to fake the perspective for the viewer, and the distorted models having a significant impact on the dynamics on the animation as the project progressed. The light within the painting is also unusual, with highs, lows, and reflections being at times independent of one another. Although by far the biggest challenge was the fluid dynamics. Houshiary's film A Cup and a Rose is close to six minutes long, with water simulation throughout. Fluid dynamics and simulation is one of the most complex and computationally expensive areas within 3D animation, and as a small studio simulating the fluid dynamics required to realise Houshiary's vision for A Cup and a Rose was incredibly challenging! Some of the key challenges included the intricate and subtle nature of the first half of the simulation, the transition from a small scale (cup) to large scale (sea) simulation, and sculpting the water simulation as the cup fills, overflows, and then crashes down onto the plate and bench. The animated water throughout A Cup and a Rose is constantly directed to fit the scene and narrative, at times the underlying physics of the simulation subtlety influenced, whilst at others quite dramatically manipulated, to achieve Houshiary's vision for the film.

The 3D animation for Houshiary's A Cup and a Rose was created using SideFX Houdini FX and Autodesk Maya, the film was rendered using Chaos Group V-Ray, textures were created in Adobe Photoshop, compositing and editing was completed in Adobe After Effects.

Houshiary's film A Cup and a Rose is exhibiting as part of Houshiary's A Thousand Folds exhibition at the Lehmann Maupin Gallery in New York City between 8th April and 28th May 2021.

The below is an extract from the press release about Shirazeh Houshiary’s A Cup and a Rose:

Formal elements of Renaissance painting can be found in Houshiary’s work in her composition, rhythm, structure, and depiction of light. This is particularly evident in her new digital animation A Cup and a Rose (2019) inspired by the 17th century Spanish painter Francisco de Zurbarán’s still-life painting A Cup of Water and a Rose (1630) and set to a musical score by Estonian composer Arvo Pärt titled "Cantus in Memoriam." The modest scale of Zurbarán’s still-life painting (21.2 x 30.1cm) speaks to the beauty of life and the transience of all things. It juxtaposes man-made objects with nature to create an equilibrium where nature and culture are in harmony, an element that has touched viewers through the centuries.

"My film recognizes that this harmony is at odds at this moment in time, where culture and mankind are in conflict with the natural world. I have animated the still-life first with nature as the context, change is manifested through the transformation of the artefacts, and humanity is metaphorically embedded in the whole. The cup breaks as the pressure of the water within it intensifies and the rose ages only to eventually pulverize as the cup shatters. This video installation echoes the theme of fragmentation and fission to reveal that space where infinity appears fleeting and vanishing only to revert to a plenitude of water and to appear as though all comes and goes again and again with no end to it. There is no perfection and no imperfection, just fluvial movement."

Click below to find out more about Houshiary’s film A Cup and a Rose!

A Cup and a Rose

Rated 5 stars by our clients