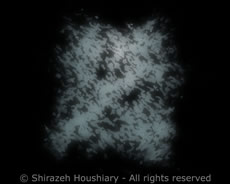 Veil will be presented at the Lehmann Maupin Gallery (New York) between 18th February - 25th March 2006.