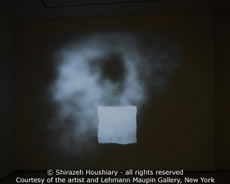 Photographs of the fine art film installation Veil projected at the Lehmann Maupin Gallery (New York) have been added to the hotbox studios animation portfolio.