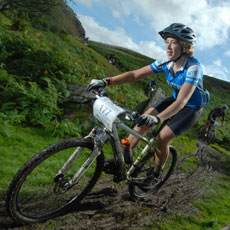 Throughout 2009 Hotbox Studios and our sister company Hotbox Events has been a proud sponsor of Amy O'Loughlin. Amy has spent much of 2009 training to compete in the the Gore Bike Wear TransWales Mountain Bike Event which took place in Wales in August.

Hotbox first sponsored Amy O'Loughlin in 2007 as part of a four woman mountain bike team competing in the Nightrider12 event at Plymouth's Newnham Park; raising money for the Force Cancer Charity. Following a podium finish in the Nightrider12, Amy got back in touch in early 2009, this time training for TransWales.

All here at Hotbox send huge congratulations to Amy for making it through TransWales 2009, let alone achieving a podium finish! Having now recovered a little, Amy has sent through some info about the TransWales event and her journey from the start line to the podium, this you can find below...

My name is Amy O'Loughlin, I'm 24, from Devon (living in London) and proudly sponsored by Hotbox Events. On August 15th 2009, I embarked on the TransWales. The 'Trans' events have been happening globally for nearly ten years, in the UK for the last three. They are a combination of marathon mountain bike racing, extreme touring and adventure racing. Using the wondrous Welsh terrain as a backdrop, the GORE BIKE WEAR TransWales 2009 entailed seven days of untimed linking stages and four race stages. My race fee, sponsored by Hotbox, entitled me to a race entry, three meals a day and my kit taken from check point to check point each day.

I had trained on and off road intensively for six months and was averaging 150 miles a week, with a combination of on and off road rides, hill training and general commuting each day for my work as a cycle instructor. I had competed in a few cross country races prior to the TranWales event and been racing and training with a Swansea based club called Beyond 925. Three of the club members had also entered the big race; two in a male pair and one as a solo veteran. My previous racing experience had been in teams of two or four and on small circuits and nothing that involved consecutive days over such a distance. I sought nutritional advice and prepared measured amounts of gels, bars and electrolytes. I also did some zone training to ascertain my maximum heart rate and highest sustainable pace. I entered the race as part of a female pair but unfortunately my race partner had to drop out two weeks prior due to illness which was later diagnosed as over training. I decided to remain in the event but as a female solo; a larger and more competitive race category. My bike was tuned and ready to ride, with the combined riding knowledge and experience of the Beyond 925 riders and confidence in my own fitness, I felt I was as prepared as I could be for the event.

Each day we were given seven hours to arrive at the evening check point. If we did not get there in time, we would be penalized. The night race stage and final day both had shorter cut off times. The courses were well marked and the majority of the time I rode to the middle or rear of the pack during the linking stages. Top riders were taking 4 - 5 hours to complete each day, and stayed at the front to ensure they would not be held up in the technical sections and most importantly, the timed race stages. The first day was without a race stage, I was finding my feet sinking back into a long day in the saddle and conserving as much energy as possible. I would often ride with my Beyond 925 friends but found mid morning slogs up the hills suited me solo and allowed me time to concentrate on my breathing and finding my rhythm for the day. The riding throughout the week was some of the best I have ever done, and we were spoilt with the best natural trails Wales has to offer. The moorland, river crossings and valleys kept the riders on guard and by the third day fatigue began to show and the aim of the game was self preservation. I came third in two of the four race stages and achieved a third place overall in the female solo category! My first podium finish came as a great surprise and when I did not make it up there again the following night I had to really push myself to fight for a good time in each of the following race stages and not take risks during the linking stages. The below is a little more detail about each day:

I spent the day adjusting saddle height, chatting to fellow riders, and observing the race etiquette. The climbs felt tough and my body took time to adjust.

Early in the day I was taken down on a road climb; an unfortunate accident. For the following 5 days I sought medical attention each morning and night and now have a fantastic war wound to prove it! A surprise third place in the race stage gave me a reason to have a thermos cup of wine that evening.

This was a very messy race stage with quite a few serious crashes. I secured a fourth place on this race stage and my battle for third place with Maggie Mc Phillips began.

My lights died 10 minutes before my lap began and a fellow rider saved me just in time. This was the first time I had ridden this course and it was a thrill seeking affair! I secured another 3rd place and yet another Buff.

Brechfa is an amazing place to ride and I absolutely loved this race stage and rode it clean for a refreshing change. The ride home, however, was tough due to race crashes holding up the linking stages. Tears ensued but the cut off time was reached. Just!

Just when you thought the race was going to get easier and the organizers couldn't possibly faze you, they throw some of the biggest hills and the most exhausting mind destroying downhill at us yet. Incredible scenery and great camaraderie got me through.

The bike just about held out until the final day. After carrying me through bog snorkeling country, down black runs and camping out every night, it only finished with two buckled wheels (with two broken spokes) an entirely bent rear mech, one pair of totaled brake pads and some bottomed out forks. And, a third overall!

The TransWales 2009 was an incredible adventure and without doubt the toughest, most exhilarating thing I have ever done. I felt utterly spoilt by the quality of riders I was able to ride with, and the trails and routes which we were guided around throughout the week. My technical abilities improved greatly during the week, and under duress proved the best way to work out strengths and weaknesses. Many lessons were learnt such as; paying extra for a massage; taking careful advantage of the free caffeinated drinks; always clean your bike BEFORE dinner!

I'd like to give huge thanks to Mark Hatchard for funding this adventure. I hope I've done the company proud and look forward to putting Hotbox Events on the back of my new GORE BIKE WEAR jacket!