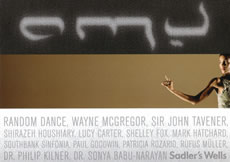 The Critic' National Dance Awards are currently the only professional awards in the UK devoted exclusively to dance.

Photos of the awards can be found on the Ballet.co website.

HotBox Studios would like to send its congratulations to all involved in Amu.

You can find out more about Amu by visiting the Amu portfolio page within the animation and visual effects portfolio - in there you'll find project info, images and animations of the research and development stages of the animation.

The Random Dance website also holds info about the project and has full tour dates of all projects we have worked on with Random Dance.

Further details, images, and photos from Veil ( a project created out of Amu) can be found via the Shirazeh Houshiary Veil section of the HotBox Studios Animation & Visual Effects Portfolio.